Quite a large part of Lithuanians admire Scandinavians and try to adopt their lifestyle in many different areas. However, according to visual communication specialists, Lithuanian and Scandinavian websites design trends have more differences than similarities.

Lithuanians have not formed their own style yet

According to Scandinavian and Lithuanian company “Gamadigi”, which specializes in visual communication solutions, director Julija Moisenko, the concept of Scandinavian design that we recognize today, was formed in the second half of the twentieth century, whereas Lithuanian design is still in the development stage and thus taking over trends and tendencies from neighbor countries.

“Scandinavian style might be characterized by its simplicity, minimalism and functionality. Dominating colors are bright or neutral, like white, brown, light blue or wood. Traditionally, Scandinavian design is considered timeless, sophisticated, versatile and fresh. Scandinavians do not try to make over sophisticated products, but rather concentrate upon the needs of the target audience. Therefore, their web pages have a longer lifespan, when usually standard webpage loses its functionality after 3-4 years“,- says J. Moisenko.

According to J. Moisenko, Lithuanian customers usually already know what design they want before contacting the agency. Problems arise when the agency offers more creative solution, but the customer usually tends to stick to the usual standards.

“Company executives often do not trust agencies and do not believe that particular website can have an impact on sales. I think that when this situation will change, good designers will able to offer websites, which not only represent the company, strengthens its brand, but significantly contributes to sales”,- thinks J. Moisenko.

Everyone knows that Lithuanian programmers are salable all over the world. Unfortunately, in terms of websites designers, the situation is much worse.

“Lithuanian programmers are popular in the market, but we need to be realistic: this popularity is based on considerably lower salary expectations. If we would compare Lithuanian and Estonian programmers, we could see that we still have much to grow and improve. For example, Scandinavians are shifting their companies to Estonia and thus decreasing their costs. This is happening because local developers have already demonstrated their competence worldwide”- J. Moisenko sees advantages of Estonia.

“If taking digital design professionals in Lithuania, I have noticed that the situation is much worse than speaking about programmers. The problem is that many young designers lack of expertise in this field, because this area consists of highly sophisticated and complex processes, which involve not only design, but also layout, page content, its management functionality and other”- says “Gamadigi” director.

According to her, there are also some positive signs of improvement in Lithuanian digital design field.

“I’ve noticed that higher skilled designers begin to follow market news, trends for the coming year and start representing them in their works. Also, many young people gain experience abroad and return to Lithuania to apply it. I think that designers who want to climb the corporate ladder should seek a place in an international agency in Lithuania, to obtain a versatile experience, and then go to foreign markets to demonstrate their skills, “- shared her opinion J. Moisenko. 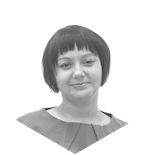 Julija has gained her degrees in Business organization, marketing, sales and communication management, during her studies in Lithuania, Sweden and Estonia. She has more than a nine year working experience in online and offline marketing communication field focusing on Scandinavian and Baltic markets. She speaks English and Russian, and currently continues her Swedish languages studies. Julija is interesting in mountaineering during her free-time.